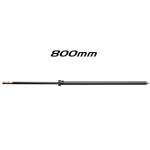 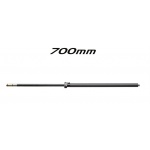 The Slug Tensioned Barrel Kits will be available in 700mm & 800mm with slug ready Smooth Twist X Heavy Liners!
To push the boundaries of what small bore slugs can do, FX is introducing Slug Tensioned Barrel for the FX Impact. These barrels will allow the FX Impact to shoot heavier slugs at the speeds needed to create a higher BC which will allow the Impact to shoot at further distances.

This barrel has achieved a first in the airgun world, an airgun shooting the same caliber and same grain weight bullet as a common firearm. The 800mm Slug Tensioned Barrel, when combined with a Power Block and Tungsten hammer weight equipped FX Impact, will shoot a .22 Caliber 40gr slug at speeds of 1030 ft/s (the common weight and speed shot by many professional .22LR competition shooters).

The .22 caliber version of the 800mm Slug Tensioned Barrel Kit is arriving soon! Other Calibers of the 700mm and 800mm Barrels are set to release at a later date.