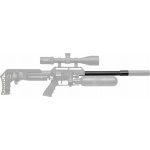 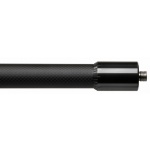 *FOR THE FX IMPACT*

*Will not fit in factory FX case with a 700mm barrel for safe shipping.

This integrated shroud system offers new features that will change your tuning process and give you a level of precision control never before available to an airgun. The FX Integrated Harmonic Barrel Tuner offers both dampening and tuning features that will have you gain new heights of accuracy from your FX Airgun.

The specially designed shroud of the Harmonic Barrel Tuner first works to dampen the barrel, making the harmonic signature of the barrel quieter, more subdued, and controllable. This, when combined with the new FX Carbon Fiber Liner Sleeve, also stiffen the barrel system which further lowers the barrel’s harmonic amplitude (or whip) throughout the entire shot cycle. Both of these factors combined, create tighter shot groups, but are only part of the overall barrel tunning that this FX system brings. The finishing touch is found in the integrated rotating running weight, located on the end of the shroud.

Made from a specifically selected metallic alloy; this allows the running weight to have enough mass to affect the weight distribution of the overall barrel system. Shooters will find that even the smallest amount of rotating adjustment of the tuner weight by only a few thousands of an inch, can change how your gun shoots groups (especially when shooting medium to long range distances). The beauty and genius of the FX Integrated Harmonic Barrel Tuner is realized with the single variable testing and tuning found both with the shroud system and internally with the new FX Impact M3.